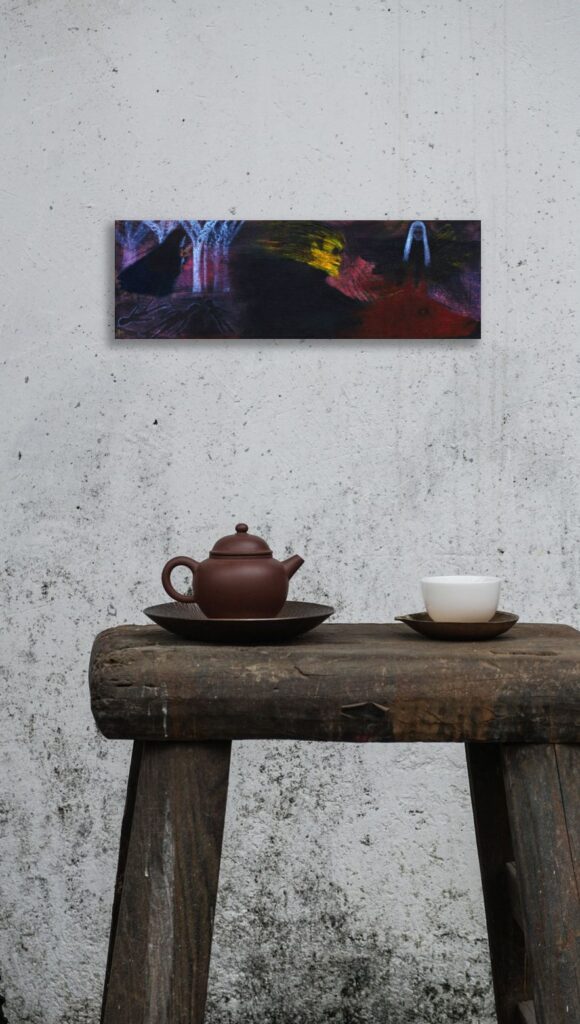 And he fell asleep again, and dreamed, and this was his dream.
He thought that he was wandering through a dim wood, hung with strange fruits and with beautiful poisonous flowers. The adders hissed at him as he went by, and the bright parrots flew screaming from branch to branch. Huge tortoises lay asleep upon the hot mud. The trees were full of apes and peacocks.
On and on he went, till he reached the outskirts of the wood, and there he saw an immense multitude of men toiling in the bed of a dried-up river. They swarmed up the crag like ants. They dug deep pits in the ground and went down into them. Some of them cleft the rocks with great axes; others grabbled in the sand.
They tore up the cactus by its roots, and trampled on the scarlet blossoms. They hurried about, calling to each other, and no man was idle.
From the darkness of a cavern Death and Avarice watched them, and Death said, ‘I am weary; give me a third of them and let me go.’ But Avarice shook her head. ‘They are my servants,’ she answered.
And Death said to her, ‘What hast thou in thy hand?’
‘I have three grains of corn,’ she answered; ‘what is that to thee?’
‘Give me one of them,’ cried Death, ‘to plant in my garden; only one of them, and I will go away.’
‘I will not give thee anything,’ said Avarice, and she hid her hand in the fold of her raiment.
And Death laughed, and took a cup, and dipped it into a pool of water, and out of the cup rose Ague. She passed through the great multitude, and a third of them lay dead. A cold mist followed her,
and the water-snakes ran by her side.
And when Avarice saw that a third of the multitude was dead she beat her breast and wept. She beat her barren bosom, and cried aloud. ‘Thou hast slain a third of my servants,’ she cried, ‘get thee gone. There is war in the mountains of Tartary, and the kings of each side are calling to thee. The Afghans have slain the black ox, and are marching to battle. They have beaten upon their shields with their spears, and have put on their helmets of iron. What is my valley to thee, that thou shouldst tarry in it? Get thee gone, and come here no more.’
‘Nay,’ answered Death, ‘but till thou hast given me a grain of corn I will not go.’
But Avarice shut her hand, and clenched her teeth. ‘I will not give thee anything,’ she muttered.
And Death laughed, and took up a black stone, and threw it into the forest, and out of a thicket of wild hemlock came Fever in a robe of flame. She passed through the multitude, and touched them, and each man that she touched died. The grass withered beneath her feet as she walked.
And Avarice shuddered, and put ashes on her head. ‘Thou art cruel,’ she cried; ‘thou art cruel. There is famine in the walled cities of India, and the cisterns of Samarcand have run dry. There is famine in the walled cities of Egypt, and the locusts have come up from the desert. The Nile has not overflowed its banks, and the priests have cursed Isis and Osiris. Get thee gone to those who need thee, and leave me my servants.’
‘Nay,’ answered Death, ‘but till thou hast given me a grain of corn I will not go.’
‘I will not give thee anything,’ said Avarice.
And Death laughed again, and he whistled through his fingers, and a woman came flying through the air. Plague was written upon her forehead, and a crowd of lean vultures wheeled round her. She covered the valley with her wings, and no man was left alive.
And Avarice fled shrieking through the forest, and Death leaped upon his red horse and galloped away, and his galloping was faster than the wind.

From “The Young King”